Labour and Migration in India 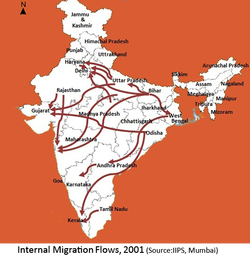 Seasonal migration for work is a pervasive reality in rural India. An overwhelming 120 million people or more are estimated to migrate from rural areas to urban labour markets, industries and farms. Migration has become essential for people from regions that face frequent shortages of rainfall or suffer floods, or where population densities are high in relation to land. Areas facing unresolved social or political conflicts also become prone to high out migration. Poverty, lack of local options and the availability of work else where become the trigger and the pull for rural migration respectively.

The map shows the major migration corridors in India along which large scale movement of workers takes place. Some regions like UP and Bihar have been known for rural migration for decades - however newer corridors like Odisha, Madhya Pradesh, Rajasthan and recently even North East have become major sending regions of manual labour. Among the biggest employers of migrant workers is the construction sector (40 million), domestic work (20 million), textile (11 million), brick kiln work (10 million), transportation, mines & quarries and agriculture. Managed in many cases by private labour contractors and fuelled by social networks there are well formed patterns in movement of labour across hundreds of kilometres within the country. Figure 1: Major net migration flows, 2001 (Source: IIPS, Mumbai)
the Migrant labour want to change there future plan withaut any plan.

Migrants form the largest part of India's vast unorganized work sector. Their entry into the labour markets is marked with several endemic disadvantages. Devoid of critical skills, information and bargaining power, migrant workers often get caught in exploitative labour arrangements that forces them to work in low-end, low-value, hazardous work. Lack of identity and legal protection accentuates this problem. The hardships of migrant workers are especially magnified when state boundaries are crossed and the distance between the "source" and "destination" increases. Migrants can also become easy victims of identity politics and parochialism.

Despite the vast numbers of migrant workers, the policies of the Indian state have largely failed in providing any form of legal or social protection to this vulnerable group. In a continuous state of drift, migrants are left out of the scope of state provisions at both ends - the "source" and the "destination". The urban labour markets treat them with opportunistic indifference extracting hard labour but denying basic entitlements such as decent shelter, fair priced food, subsidized healthcare facilities or training and education. They are also usually out of bounds of government and civil society initiatives, both because of being "invisible" and for their inability to carry entitlements along as they move.

There is one legislation known as Inter-State Migrant Workers Act, 1979 which aims to safeguard migrants. However, it is obsolete and is hardly enforced anywhere. A serious constraint in framing an effective policy is the lack of credible data on incidence of seasonal migration. Census and NSS that have a significant impact on policy making are unable to capture seasonal and circular migration. Migrants may also be missed out in BPL Surveys. Above all, they are unable to participate in the formal electoral system and are denied a fundamental citizenship right - their right to vote.

Economic growth in India today hinges on mobility of labour. The contribution of migrant workers to national income is enormous but there is little done in return for their security and well-being. There is an imminent need for solutions to transform migration into a more dignified and rewarding opportunity. Without this, making growth inclusive or the very least, sustainable, will remain a very distant dream.